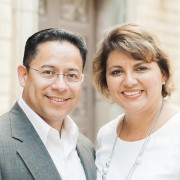 Guide: How to Keep Passover in Your Home
Gateway Jewish Ministry videos

Passover is the oldest of Biblical festivals. It is a special time to recount and celebrate the deliverance of the Children of Israel from 430 years of slavery in Egypt (Exodus 12:40-41). The purpose of the celebration is to retell the story of God’s faithfulness and redemption and pass it on from one generation to the next.

Believers in Jesus not only have the wonderful opportunity to recount the deliverance of the Children of Israel from Egypt but also make the parallel references to Jesus, the Passover Lamb of the new covenant,

And when He had given thanks, He broke it and said, “This is My body, which is for you. Do this in memory of Me.” In the same way, He also took the cup, after supper, saying, “This cup is the new covenant in My blood. Do this, as often as you drink it, in memory of Me.”

Absolutely! As believers in Yeshua, Jesus, we have the opportunity to observe the Biblical feasts out of love, not out of legalistic obligation. As a Jew, Jesus himself kept Passover. During his last Passover meal, “He took bread, gave thanks and broke it, and gave it to them, saying, “This is My body which is given for you; do this in remembrance of Me.” Likewise, He also took the cup after supper, saying, “This cup is the new covenant in My blood, which is shed for you.” (Luke 22:19-20). He said to his disciples, “I will never drink of this fruit of the vine from now on, until that day when I drink it anew with you in My Father’s kingdom” (Matthew 26:29). Messianic Jews explain Jesus was referring to drinking the fourth cup (explained below). Believers in Yeshua are able to see the symbolism of Jesus in the elements used for Passover. [By the way, as a fully Jewish person, Jesus kept Shabbat, “As was His custom, He went into the synagogue on Shabbat, and He got up to read” (Luke 4:16).]

What is Passover Seder?

Seder means “order,” refers to the order of the Passover celebration. It’s a time to make the ancient story of deliverance our own.

How long does Passover last?

Passover lasts 8 days; it is two holidays back to back: Passover is on day one, followed by 7 days of the Feast of Unleavened Bread.

What is the Feast of Unleavened Bread?

This is a 7-day feast that follows Passover during which no food containing yeast or leaven is consumed, called hametz. When the people of Israel left Egypt in haste there was no time for the bread to rise.

For seven days you are to eat matzot [unleavened bread], but on the first day you must remove hametz [leaven] from your houses, for whoever eats hametz from the first day until the seventh day, that soul will be cut off from Israel.

Why do some remove leaven from their homes?

In many homes prior to Passover, a detailed search for hametz [leaven] is conducted. As believers, we can take this time to purify ourselves.

Paul the apostle urged us to get rid of leaven (sin) in our lives:

Your boasting is no good. Don’t you know that a little hametz [leaven] leavens the whole batch of dough? Get rid of the old hametz, so you may be a new batch, just as you are unleavened—for Messiah, our Passover Lamb, has been sacrificed. Therefore let us celebrate the feast not with old hametz, the hametz of malice and wickedness, but with unleavened bread—the matzah [unleaved bread] of sincerity and truth.

Why do some not eat lamb during Passover?

Ashkenazi Jews do not eat lamb at Passover because currently there is no Temple where animals can be sacrificed. The bone is used for the center plate as a reminder of the lack of the sacrifice.

Rather, at the place Adonai your God chooses to make His Name dwell, there you will sacrifice the Passover offering in the evening at sunset—the time of your coming out from Egypt.

The Bible does not seem to prevent eating lamb:

…each man is to take a lamb for his family one lamb for the household… They are to eat the meat that night, roasted over a fire. With matzot [unleavened bread] and bitter herbs they are to eat it.

Haggdah means “telling,” a guide of the order and prayers for the Passover Seder.

What is the Seder Plate?

The Seder Plate is a special platter placed at the center of the table containing the biblically required elements.

What elements are needed for the Seder table and their meaning?

What are the 4 cups and their meaning?

The Cup of Sanctification (Kadeysh)

A symbol of joy reminding us of the joy of our salvation. “I will bring you out from under the burdens of the Egyptians…” (Exodus 6:6 TLV). With this cup, we sanctify the entire Passover meal.

A symbol of deliverance recalling God’s redemption through the great judgments He brought upon the Egyptians through the ten plagues. “I will redeem you with great judgments…” (Exodus 6:6 TLV). We dip the finger into the cup and we remove it and place it on a plate as each of the 10 plagues of Egypt is named. We do this lessen the joy to remember the Egyptians who suffered so much during the 10 plagues. After this cup, we sing the song “Dayenu” which means “It would have been enough.” (See lyrics below).

The Cup of Redemption

A symbol of celebration for God’s freedom and deliverance in our lives. “I will redeem you with an outstretched arm…” (Exodus 6:6 TLV). This is the cup Jesus used to establish communion. After drinking this cup, Jesus went out with his disciples. It was customary to sing Psalms 113-118 between the third and fourth cup. While other versions of the Bible state, “And when they had sung a hymn, they went out to the Mount of Olives” (Matthew 26:30 NKJV), the TLV version amplifies which song the author is referring to, “After singing the Hallel, they went out to the Mount of Olives” (TLV). Jesus sang after drinking the third cup. He did not drink the fourth cup, explained below.

A symbol of acceptance and praise because God has chosen us as His own people and desires to be our God. “I will take you to Myself as a people, and I will be your God.” (Exodus 6:7 TLV). Messianic Jews explain that Jesus drank from the first three cups, and the fourth cup is what he referred to when Jesus said, “I will never drink of this fruit of the vine from now on, until that day when I drink it anew with you in My Father’s kingdom” (Matthew 26:29).

What is the Dayenu song?